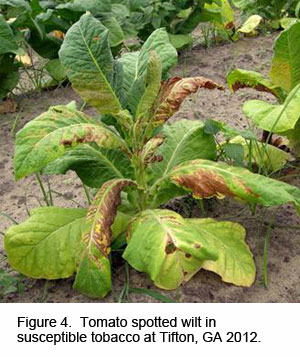 An example of spotted wilt damage in tobacco is shown in the photograph. The estimates for disease incidence (% plant loss) are based on disease evaluations in 10-60 on-farm trials per year, plus estimates from county agents not in the farm trial program, plus a final general estimate of plant loss from tobacco crop specialists.

The yield loss is estimated based on disease incidence figures. Tobacco shows a pattern of continued high loss after peanut losses declined sharply in 1998 (Fig. 2). Imidacloprid was labeled for managing spotted wilt in 2000. An imidacloprid insecticide treatment can reduce losses by 25%-30% and was used on 75%-80% of the tobacco by 2005. Actigard (chemically induced resistance) treatment of seedlings prior to transplanting was approved in 2003. A combination of Actigard followed by imidacloprid treatment of seedlings can reduce spotted wilt incidence by about 50%. This program gained acceptance slowly so that by 2006 ~85% of the Georgia crop was treated in this manner. Between 2000 and 2008, disease loss curves for treated (imidacloprid only or Actigard + imidacloprid) plants parallel, at a lower level, losses for untreated plants. Loss estimates in Fig. 2 take into account the relative portions of the crop untreated, treated with imidacloprid only, and treated with Actigard + imidacloprid. These portions are based on formal and informal surveys.

Questions About TSWV in Tobacco? 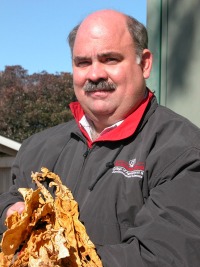