Tomato spotted wilt (TSW) has severely challenged traditional pest management practices in tomato and pepper because it is severe and unpredictable. Effective, sustainable management of TSW is complex and requires multiple approaches to have maximum effectiveness, TSWV management must be implemented in a manner that reflects the epidemiology of TSW. The virus that causes TSW, tomato spotted wilt virus (TSWV), is capable of infecting hundreds of plant species. As a result, in much of the Southeastern USA, TSWV infected plants are common throughout the landscape.

TSWV is spread solely by thrips.  Although at least nine species of thrips have been shown to transmit TSWV, the predominant vectors vary geographically. In the Southeastern USA, two species, the tobacco thrips (Frankliniella fusca) (Fig. 1) and the western flower thrips (F. occidentalis) (Fig. 2), are the principal agents of spread.  In addition to spreading TSWV, both thrips species are important pests in their own right due to the damage caused by their feeding (see “Thrips Vectors” section for more information).

Movement of TSWV in the Landscape

Since TSWV is spread solely by thrips in the landscape, it is important to first understand the complex relationship between TSWV and its thrips vectors. The virus can only be transmitted by thrips that have acquired it by feeding on infected plant tissue as young larvae, specifically first instar. Following ingestion, the virus infects cells in the midgut and subsequently spreads via cell-to-cell movement to the salivary glands. The virus continues to replicate in the salivary glands and is transmitted to healthy plants when the thrips salivate during feeding.  Due to the time required for the virus to spread to the salivary glands and replicate, there is a temperature dependent latent period of 3.5 to 7 or more days following ingestion of the virus before the thrips is able to infect another plant.  Although some thrips that acquire TSWV as a first instar are able to transmit the virus in the second instar, most are not able to transmit until they become adult. Moreover, because second instars do not disperse readily and subsequent pre-adult stages do not feed, adults, which disperse readily and remain infected for life, are primarily responsible for spreading TSWV. Because the virus is unable to move from the midgut to the salivary glands of thrips that acquire TSWV as an adult, thrips that acquire the virus by feeding on an infected plant as an adult are not able to transmit. An important consequence of this relationship is that only infected plants on which thrips vectors reproduce can act as a source for spread to other plants.

After an infected adult thrips inoculates a plant with TSWV by feeding, it takes one to three or more weeks, depending on plant age and environmental conditions, before the virus spreads through the plant and is available to be acquired by thrips larvae feeding on the plant.  This delay, combined with the fact that only adults that have acquired the virus as first instars are able to spread TSWV, means that a plant infected in the field cannot become a source for spread of the virus to other plants until a minimum of two to three weeks have passed. The length of this delay is influenced by numerous factors including plant age and temperature. It is important in determining the potential for TSWV to be spread from plant to plant within a susceptible crop field because as plants age they become more resistant to infection. In the case of pepper, susceptibility to infection under a given level of inoculation pressure (number of infectious thrips feeding on the plants) decreases by an average of approximately 50% in the first 7-9 days after transplanting. This increase in resistance with plant age explains why tobacco, pepper and tomato crops transplanted during periods of peak virus spread suffer greater infection than those that are transplanted several weeks prior to the period of peak virus spread. It also explains why within field spread of TSWV tends to be limited unless large populations of reproducing vectors develop within the crop.  Because age-related resistance is not absolute, within field spread of TSWV can be significant when large populations of vectors are allowed to develop. 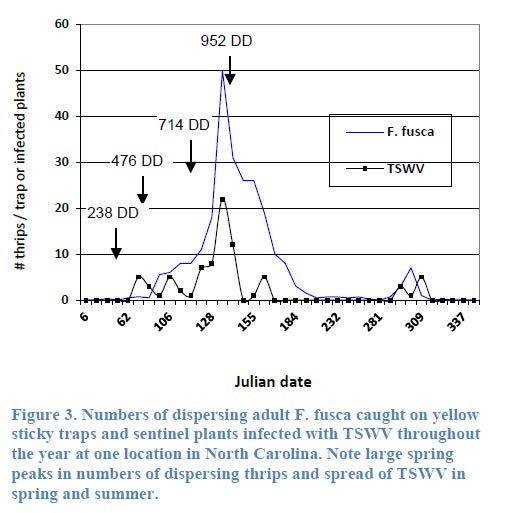 Although both F. fusca and F. occidentalis spread TSWV in tomato and pepper, F. fusca is primarily responsible for early season spread that most often causes the greatest yield losses. Winter annual weeds serve as principal overwintering hosts of both TSWV and F. fusca, and are the main sources for spread of TSWV into crops in spring. These weeds are infected by F. fusca and F. occidentalis dispersing from infected senescing summer hosts in the fall (peak between Julian dates 281 & 309 in Fig. 3). Subsequent spread of TSWV among winter weeds in late winter and early spring by F. fusca results in an increase in the abundance of infected plants that serve as sources for spread of TSWV into susceptible crops and summer weed hosts in spring (Fig. 3)

Primary spread of TSWV from non-crop hosts to susceptible crops by F. fusca in spring accounts for most early season spread and significant economic loss in pepper and tomato crops in NC, SC & GA. In both of these crops, plants that are infected early in the season will likely produce few if any marketable fruit. However, in situations where large populations of F. occidentalis develop within pepper and tomato crops following bloom, they can cause significant later-season spread of TSWV that results in irregular ripening of fruit and suppresses marketable yield (Fig. 4). Each of these situations present different pest management challenges.  The late winter and spring populations F. fusca, which account for the majority of the early season spread of TSWV, are determined largely by temperature, rainfall and host plant suitability, whereas the within-crop population dynamics of F. occidentalisare significantly influenced by insect control practices, naturally occurring biological control by predaceous minute pirate bugs, Orius spp. and a parasitic nematode, Thripinema fuscum.

TSWV infected weed hosts are well established throughout the southeastern US, and year-to-year severity of TSWV infections in crops is strongly influenced by the size and timing of F. fusca populations, which spread TSWV among weed hosts and from weeds to crops in the spring.  Winter and spring temperatures and rainfall are critically important factors affecting the growth and dispersal of F. fusca populations.  Increasing temperatures in spring increase the rate of population growth of tobacco thrips on winter weeds (Fig. 5); whereas rainfall suppresses populations by killing thrips larvae. The amount of rainfall and frequency and duration of rain events are important. Because rainfall disproportionately affects thrips larvae, its effect on thrips population growth is greatest during periods when a high proportion of the thrips population is represented by young larvae.  For this reason, there are critical periods during spring when high amounts of rain or frequent rainfall events disproportionately suppress F. fusca populations. In eastern North Carolina rainfall during late March, late April and early May is critical in determining the numbers of dispersing F. fusca available to spread TSWV into crops in spring.  Most spread of TSWV into crops from weed hosts in spring is associated with dispersal of adult F. fusca of the 3rd and 4th generations following colonization of winter annual weeds in the fall. Because development of F. fusca from egg to adult requires 238 degree days (base 10.5°C) and the effects of rainfall on population growth are known, the timing of generation turnover (see Fig. 3) and relative magnitude of F. fusca dispersal in spring can be explained based on a knowledge of degree day accumulations from the median date of peak F. fusca dispersal in fall, and rainfall amount and frequency during March, April and May.  This information has proven useful in predicting the potential for spread of TSWV in tobacco in North Carolina and in timing applications of imidacloprid and Actigard for TSWV management in tobacco. 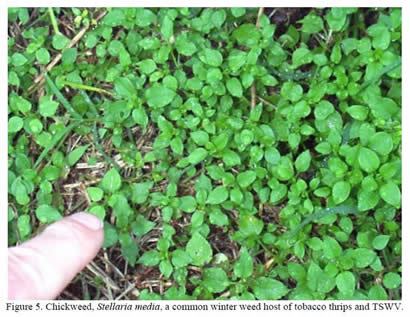 The amount of TSWV spread that actually occurs is related to the abundance of TSWV infected winter annual weeds present in the landscape, the size of the F. fusca populations that develop on winter annual weeds in the landscape, and when they disperse into susceptible crops. The greatest potential for spread is expected when infected weeds are abundant in the landscape and F. fusca populations are high; conversely the least spread is expected when both abundance of infected weeds and F. fusca populations are low (Table1).  The situation is more complex when the abundance of either infected weeds or F fusca, but not both, is low. In these situations the potential for spread can range from low to high depending on the relative magnitude of these two factors. Because F. fusca populations play such a critical role in spread of TSWV among winter annual weeds and in subsequent spread from the weeds into crops, it is not surprising that final TSW incidence in tobacco, a crop in which there is little or no plant-to-plant spread, is strongly influenced by winter and spring temperatures and rainfall. Winter temperature and rainfall affect spread of TSWV among weeds by F. fusca, and spring rainfall and temperature relationships described in the preceding paragraph, determine the timing and magnitude of F. fusca dispersal from winter weeds into crops.

Although winter annual weeds are the major source of TSWV spread into crops in the spring, gradients of TSWV spread into fields from weedy field margins are not apparent when F. fusca is the primary vector. However, such gradients from a virus source have been reported in situations where F. occidentalis is the primary vector. This difference appears to reflect differences in the dispersal propensity between these species. 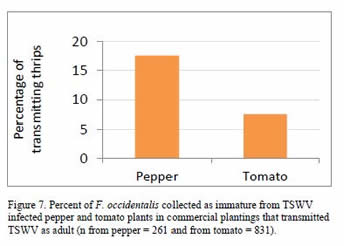 Role of F. occidentalis.  F. occidentalis is an efficient vector of TSWV and in many areas of the world is considered to be the most important vector.  However, in North and South Carolina and Georgia the role of F. occidentalis in spread of TSWV in peppers and tomato is complex and less well understood than that of F. fusca. F. fusca is typically an early invader into the tomato crop and can be found on foliage within a few days after transplanting. This early transmission of TSWV is often associated with severe TSWV symptoms that appear several weeks after inoculation. Unlike F. fusca, F. occidentalis frequently produces large reproducing populations in tomato and pepper when not managed correctly (Fig. 6). These populations are capable of spreading TSWV within the crop as the season progresses (Fig. 7). When high populations are present, the prevalence of infected plants within the field can reach very high levels late in the season (Fig. 8). In many instances, tomato and pepper plants infected late in the season express symptoms only in the fruit; when foliar symptoms are present they are typically mild and limited to a few young leaves or a single branch.