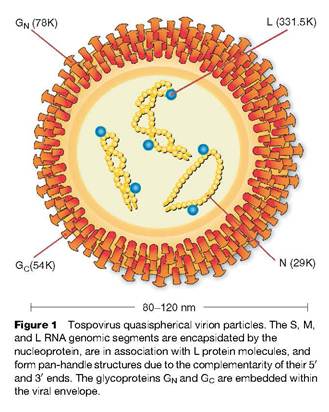 Tomato spotted wilt virus (TSWV) has generated much interest in the tospoviruses since its arrival in the USA. “Tospoviruses constitute the only genus of plant-infecting viruses in the family Bunyaviridae; however, these viruses share many molecular characteristics typical of other members of this virus family. They have an enveloped virion containing the viral genome which is distributed among three RNA segments that replicate in a manner consistent with that of other negative strand viruses (Fig. 1). All three segments have highly conserved, complementary termini resulting in a pan-handle structure, and genes with functions similar to those of viruses in other genera are located in similar locations on the genome. However, the genome organization is distinct from the other genera. The small (S) and middle (M) segments each encode two genes in opposite or ambisense polarity. Classification of a Tospovirus population as a distinct species (virus) is based upon the similarity of sequence between the nucleocapsid genes of the respective viruses. This is in contrast to the system used to differentiate viruses in other genera, which traditionally has relied on serological neutralization of infectivity or other biological properties  hemagluttination) mediated by the glycoproteins. Tospovirus isolates with greater than 90% nucleotide similarity in the nucleocapsid gene are classified as isolates of the same species (virus). Serologically related isolates with 80–90% sequence identity are subjectively classified as strains or as distinct species depending on other criteria. Isolates with less than 80% identity are classified as distinct species”(Tsompana & Moyer 2008).

“TSWV, the type member of the tospoviruses is found worldwide in temperate regions in association with its thrips vector. The wide host-range of TSWV and its thrips vector is consistent with the geographic distribution. Other tospoviruses have more well-defined distributions. For example, GBNV, WBNV, and WSMoV, that are transmitted by Thrips palmi, a thrips species found only in the subtropics, are only known to occur in Southeast Asia. TSWV has one of the most diverse host-ranges of any plant-infecting virus. The virus infects over 925 plant species belonging to 70 botanical families, both monocots and dicots. In addition, TSWV  is transmitted by approximately ten thrips species and can infect as least some species that cannot transmit it.  Important economic plants susceptible to TSWV include tomato, potato, tobacco, peanut, pepper, lettuce, papaya, and chrysanthemum. Other tospoviruses (e.g., IYSV) have much narrower host-ranges and thus the broad host-range of TSWV is not characteristic of the genus. These viruses can be transmitted mechanically or by their thrips vector, but are not transmitted transovarially, by plant seeds or pollen. Purified RNA preparations are not infectious. There is no robust plant or insect culture systems for tospoviruses. However, plant and insect protoplasts have been successfully inoculated” (Tsompana & Moyer 2008). 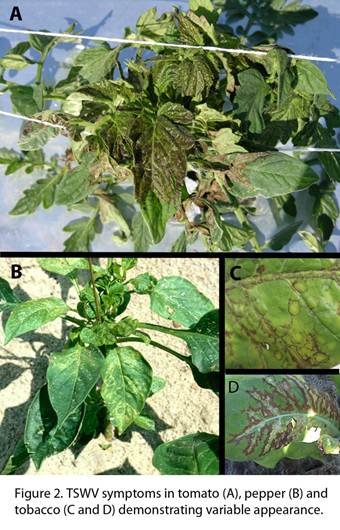 “TSWV can cause symptoms at all stages of growth, from transplant to maturity.  However, on tobacco, younger actively growing plants appear to be more susceptible to infection than slow growing hardened off plants. The symptoms vary greatly on individual plant species and among virus hosts.  Symptoms on tobacco range from discrete individual spots to systemic necrosis.  Often individual discrete spots are local infections, while infections that become systemic, move from the point of initial infection to the root systems, where the virus replicates. Systemic infection often occurs when an environmental factor, such as a temperature change, irrigation or rainfall, triggers sudden growth of the plant.,  Systemic infection results in specific leaves and the apical bud becoming necrotic.  This systemic infection often times is unilateral, indicating that it may be moving up in the xylem.  Plants having ring spot symptoms on stems in absence of any foliar systems may occur late in the season.  Very young, freshly transplanted tobacco may collapse and die without distinct symptoms. Note the variation of TSWV symptom expression in Fig. 2. Since symptoms by Tomato spotted wilt virus and other tospoviruses are highly variable they are of little diagnostic value. Necrosis on all plant parts, chlorosis, ring patterns, mottling, silvering, and local lesions are the most characteristic symptoms. It has been shown that the same strains of the same tospovirus may vary widely in symptom expression within the same plant. It is not clearly understood why many plants infected with the virus may not show any symptoms. 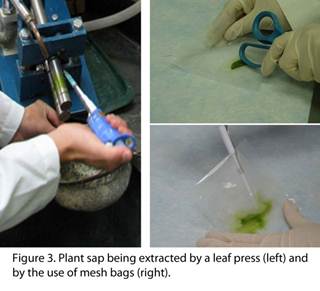 During recent tobacco growing seasons, half of the infected tobacco exhibited no outward signs of disease. The vast majority of the known plant hosts also showed no symptoms. Some of the symptoms that were exhibited may be mimics of some other pathogen or environmental stressor. This increases the need for testing protocols that will give a more definitive determination of tospovirus presence” (Csinos 2009). In tomato, we have also observed asymptomatic plants that test positive for TSWV using Enzyme-linked immunosorbent assay (ELISA) techniques (Fig. 3). Thus, detection is an important factor when attempting to assess TSWV presence in both the host plant and the thrips vector. 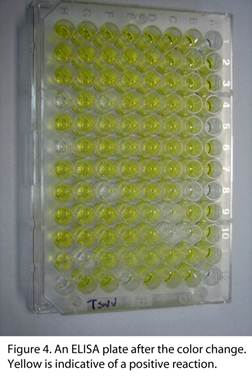 Antibodies specific to the virus are used to screen whether a particular virus is present in the tissue that is sampled. DAS-ELISA is used on a wide scale due to its reliability and the ease of screening a vast number of samples over short periods of time. Antibodies specific for a particular pathogen are coated into the wells of a polystyrene assay plate. Plant saps extracted from tissues of interest are loaded into the individual wells on the assay plate (see above Fig. 3). After a series of incubations and washes, an enzyme conjugated antibody is added to the plate, to which a colorless substrate is added after incubating and washing. The plate is observed for color changes in the assay wells after an hour using a micro titer plate reader (Fig. 4). The level of color change is given by the absorbance readings of the reader, and these readings indicate if the tested sample had the pathogen of interest within the extracted sap. Although it is commonly used on a day-to-day basis, other verification methods are used to back up the results of the serological testing. A related serological protocol employs immunostrips. This tool gives a rapid result and is convenient because immunostrips can be used directly in the field. Immunostrips are lateral flow devices that have antibodies for a particular pathogen impregnated within an absorbent pad. Plant tissue is ground up in a small plastic bag, and then the immunostrip is put in the sap and observed for a color reaction. The immunostrips will only show a positive reaction when virus levels in the tissue are very high. 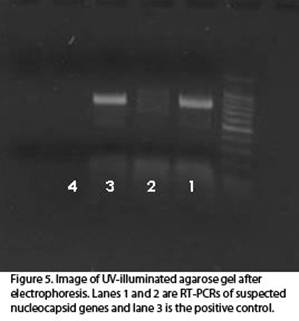 Reverse transcriptase-polymerase chain reaction (RT-PCR) is a molecular technique used to amplify a specific region of the viral genome. This technique, although time-consuming and expensive, is valuable in verifying DAS-ELISA results (Fig. 5). It can also be used to identify individual viral strains when the RT-PCR products are sequenced. Analyzing the sequenced products of RT-PCR is useful in understanding some of the epidemiological properties of the Tospoviruses. Phylogenetic analysis of some of the regional strains of TSWV and IYSV has offered some intriguing insights into the background and dynamics of the disease. In addition, due to the nature of analyzing the virus genome, a positive response using this method is the most definitive screen for tospoviruses.

Mechanical sap inoculation is another helpful tool in detection and virus culture. Tissue from a suspected infected plant is used to inoculate a known indicator plant. These indicator plants include Nicotiana tabacum L., Nicotiana glutinosa L., Nicotiana benthamiana and Emilia sonchifolia (L.) DC. Successful viral transmission to one of the indicator plants is useful in two ways: it aids in the diagnosis of a plant virus and serves as a continuous culture of a virus over time” (Mullis & Nischwitz 2009).

Csinos, A. 2009. Symptomology of TSWV in tobacco, In Tospoviruses in Solanaceous and Other Crops in the Coastal Plain of Georgia. University of Georgia CAES Bulletin 1354.

Mullis, S. and C. Nischwitz. 2009. Tospovirus detection, In Tospoviruses in Solanaceous and Other Crops in the Coastal Plain of Georgia. University of Georgia CAES Bulletin 1354.