Thrips belong to the insect order Thysanoptera (fringe-winged insects, their wings consisting of fine hairs rather than a membrane) and TSWV vector species belong to the family Thripidae. Thrips are small, slender-bodied insects (around 1-2 mm long when fully grown, Fig. 1) that have become an important agricultural pest because of their ability to transmit plant viruses. Thrips-transmitted Tomato spotted wilt virus (TSWV), of the genus Tospovirus (Family Bunyaviridae), is the most serious disease caused by tospoviruses. TSWV is transmitted by multiple species of thrips (Ullman, 1997). Thrips responsible for spotted wilt epidemics in Georgia and Florida are western flower thrips, Frankliniella occidentalis, tobacco thrips, F. fusca, and possibly F. bispinosa (Salguero Navas et al., 1991; Riley and Pappu, 2000, 2004; and Webb et al., 1997, respectively). Other thrips species that have been reported as vectors of TSWV include Thrips tabaci, T. setosus, F. schultzei, F. intonsa, F. gemina, and F. cephalica (Riley et al. 2011), but the fore mentioned species are thought to be the most important in the Southeast.

Frankliniella occidentalis key diagnostic characters: Western flower thrips is yellow to brown with 8-antennal segments (Fig. 1 and 2, respectively). Pronotal anteromarginal setae are equal in length to anteroangular setae and postocular seta IV is pronounced (Fig. 2). The tergite VIII comb is present and complete with long and irregular setae (Moritz et al. 2001, Mound et al. 2009) that are visible only under at least 100× magnification. The distribution of Frankliniella occidentalis is cosmopolitan and it is also prevalent throughout the USA.  It is one of the most studied thrips species worldwide (Salguero Navas et al. 1991a, b, Kirk 2002, Groves et al. 2003, Kirk and Terry 2003, Reitz 2008; 2009). Its spread through international shipments of ornamental plants has been documented (Perrings et al. 2005).

Frankliniella fusca key diagnostic characters: Tobacco thrips is brown with 8-segmented antennae (Fig. 3). Pronotal anteromarginal setae are shorter than anteroangular setae and postocular seta IV is reduced or absent. The comb on tergite VIII is absent in tobacco thrips (Moritz et al. 2001, Mound et al. 2009).  Tobacco thrips can have a reduced wing (micropterous) form (Fig. 4) along with the winged (macropterous) form (Oetting et al. 1993, Fig. 3). The reduced wing form of tobacco thrips is common in Georgia peanuts (Todd et al. 1995). Tobacco thrips are very common in the southeastern USA (Diffie et al. 2008) and has been reported from all other states in the continental USA (Hoddle et al. 2008). It has also been studied in laboratories in The Netherlands (Joost and Riley 2007) and recently reported in Japan (Nakao et al. 2010) 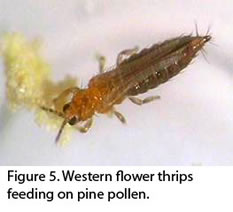 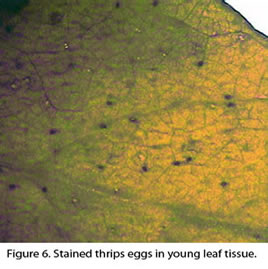 Some seasonal factors shown to affect thrips population densities include temperature (Lowry et al. 1992, Morsello and Kennedy 2009), photoperiod (Whittaker and Kirk 2004, Chaisuekul and Riley 2005), humidity (Kirk 1997), rainfall (Morsello et al. 2010), and availability of suitable hosts for food and oviposition (Lewis 1973). Temperature is likely the major factor affecting the rate of development. The number of degree days in Celsius needed to complete one F. fusca and F. occidentalis generation from egg to adult is reported to be 234 (lower threshold 10.5°C) and 253 (6.5°C), respectively, (Lowry et al. 1992). Fourteen days is about the length of time needed for a western flower thrips to hatch and mature to adulthood at 25°C, and slightly shorter for tobacco thrips (Lowry et al., 1992). Typically, F. occidentalis adults insert bean-shaped eggs into leaf, flower or fruit tissues (Hansen et al. 2003).  Similarly, F. fusca eggs are laid singly and are usually inserted in plant tissue (usually flower parts or young leaves, Fig. 6). The eggs hatch in 3-4 days. Immatures are a cream to yellowish color (Fig. 7) and adults are either dark brown or yellow/orange, depending on the species. Two larval stages last about 10-14 days, prepupa and pupa stages last around 7 days (Lowry et al. 1992).  Late second instars usually fall into the soil and pupate (Fig. 7), but some can remain on the plant (Broadbent et al. 2003). The non-feeding pupal stage is mostly immobile and has distinct and well-developed wing pads (Lewis 1973). Adults emerge within 3 days at 30ºC (Lowry et al. 1992). Adult F. occidentalis females can survive for 4-5 weeks at 30ºC and lay an average of 50 eggs (Reitz 2008). Thrips can reproduce parthenogenically. For example, fertilized F. occidentalis females are known to produce female biased sex ratios and unmated F. occidentalis females are known to produce male biased sex ratios (Lewis 1973, Moritz 1997). That is, if a female western flower thrips remain unmated then all male offspring are produced asexually. If thrips mate, they produce mostly female offspring. Adults usually have wings, although wings can be absent in some adult tobacco thrips (brachypterous form). When wings are present, they are narrow and fringed with long hairs (Figs. 2 and 3). 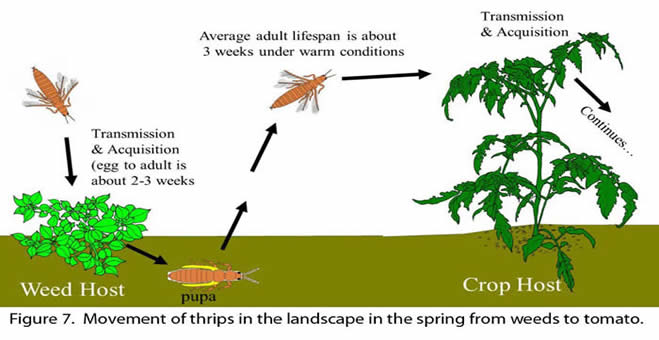 Most thrips vectors are assumed to have a relationship to TSWV similar to what has been well documented for western flower thrips (Ullman et al. 1997). First, immature thrips in the first and second instars acquire TSWV from infected host plants, the virus replicates in the vector as it matures, and subsequently viruliferous adults spread the virus when they move to other plants (Fig. 7). Virus multiplication in the thrips vector makes managing TSWV difficult because, once infected, adult thrips can migrate long distances to new host plants and quickly transmit the virus, often before thrips can be controlled. It is important to note that each generation of thrips must re-acquire the virus since the virus in adult females is not passed on to her eggs. Thus, the frequency of viruliferous adults can vary greatly over time. However, even low percentages of viruliferous thrips can cause significant yield loss. Viruliferous thrips can be <3% of the field population even in a severe TSWV year (McPherson et al. 2005). The percentage tends to increase over time in the spring. It is important to note that once thrips acquire the virus, they remain viruliferous (infected with virus) throughout their life span. Several generations occur per year in Georgia, but only one or two generations occur in a single tobacco or tomato growing season. Thrips overwinter on host plants as adults or larvae (nymphs), and can be observed on winter weeds during warm periods throughout the winter months (Beaudoin and Kennedy 2012). Thrips extracted from weeds in Georgia have predominantly been in the larval stages. It has been observed that tobacco thrips can reproduce year-round in southern Georgia in the winter onion crop and in weed hosts, even though winter populations are very low and the life cycle is greatly extended with the lower average temperatures. The relationship of thrips in the landscape to TSWV movement is discussed in more detail in the section labeled “Epidemiology". 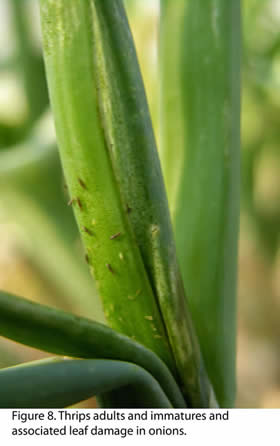 The tobacco thrips is known to feed on many economically important crops in the southeast including peanut (Todd et al. 1995), tomato (Salguero Navas et al. 1991), cotton (DuRant et al. 1994, Groves et al. 2003) and onion (Sparks et al. 2010).  Tobacco thrips primarily feed on the foliage, preferring young leaves over older tissue (Joost and Riley 2007). Their feeding induces scarring and, in severe cases, results in distortion of leaves or stunting of the plant. In onions this appears as a silvery scarring if the leaf tissue (Fig. 8). Most of the same crops and more also can have feeding associated injury by western flower thrips (Yudin et al. 1986).  Western flower thrips primarily feed on the floral parts such as petals and pollen which results in spotting and deformation of flower buds.  Even though they are prevalent in flowers (Salguero Navas et al. 1991), they can also be found on crop foliage (Todd et al. 1995, Joost and Riley 2004).  In addition, thrips feeding can also cause fruit surface dimpling (Salguero Navas et al. 1991).

Thrips use piercing and sucking mouthparts to feed on plant tissue. They produce an initial opening by penetrating the plant cuticle with their single mandible after rocking the head capsule downward and upward numerous times. Once an opening or food channel is punched through the outer cell wall, then a pair of maxillary stylets is extended into the plant tissue. Saliva is injected into the plant and cellular contents are drawn up through a pumping action (Kindt et al. 2003). The adults transmit TSWV as saliva is injected into the plant tissue. Thrips feeding can damage plant tissue directly; however, the greatest loss to agriculture is caused by the species that vector (transmit) Tospoviruses like TSWV. Since TSWV transmission occurs through thrips feeding, understanding factors that affect thrips feeding is critical for managing this pest. For example, the older the plant age, the less likely that tobacco thrips will feed on the plant (Joost and Riley 2007). Also, treatment with an insecticide can affect thrips feeding behavior. For example, the insecticide imidacloprid has been shown to reduce feeding by tobacco thrips (Joost and Riley 2004). Unfortunately, imidacloprid has been shown to increase western flower thrips settling in peanut and feeding in tomato (Riley 2007), so it is important to note that insecticide effects can be specific to the thrips species. 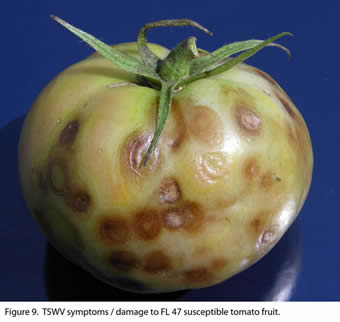 A typical example of fruit damage in tomato associated with thrips virus transmission to the tomato plant is shown in Fig. 9. The concentric ring pattern is indicative of TSWV. This damage can show up many weeks after virus transmission occurred. An example of direct thrips feeding damage to the fruit is the scarring or dimpling of the fruit surface shown in Fig. 10 which can show with a week of feeding and oviposition. The halo spotting of mature tomato fruit caused by thrips reported by Salguero Navas et al. (1991) (Fig. 11) can sometimes be confused with stinkbug damage. Stinkbug damage often causes larger areas of discoloration around the feeding site due to the much larger size of the stinkbug and deeper probing into the fruit. Thrips damage to fruit is typically associated with western flower thrips or other flower thrips species and not tobacco thrips which is more of a foliage feeder. Damage to peppers is less distinct than that observed in tomato, but is similar to the dimpling in Fig. 10. Late season control of thrips to prevent fruit damage must take into consideration how effective the insecticide is against flower thrips species. In the Southeastern USA, imidacloprid insecticide is not effective against western flower thrips (Riley 2007).